Follow One Chance to See the World on WordPress.com
Join 10,951 other subscribers

Artwork used to be mysterious. Without a definitive message, many pieces of art throughout history would and have remained unexplained and up for debate. If it wasn’t for the Rosetta Stone, Hieroglyphics would have suffered the same fate. Now I can whip out my phone and read all about this ancient language and countless others. It is pretty damn incredible. 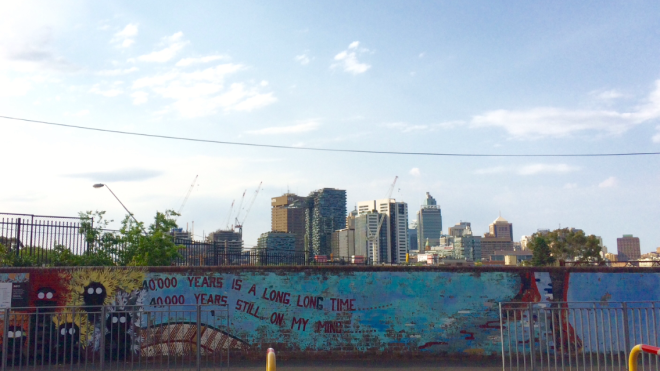 When I am walking past street art, I can do the exact same thing. If I want to learn about a piece of art that catches my eye, the chances are I can find it with a quick google search. Most artists want their message to be heard. As seemingly meaningless as some art may appear, it often has a backstory. Banksy is an exception as this artist uses anonymity but provides clear messages in the work, the anonymity making the artwork world famous.

The art seen above looks great with the skyline in the backdrop. It made me think of what would have been in place 40,000 years ago, long before such high-rises. I typed the words seen in the image into google and found an article dating back to 2013 in the South Sydney Herald. The article opens with the following:

In 1983, Redfern residents created the iconic 40,000 years mural. Thirty years later, the paint is peeling and graffiti blemishes the cracking wall. But recently, residents have united in a movement to rejuvenate the historical artwork.

In 2017, the paint still seems to be peeling. I think this weathering goes well with the message, despite the time passing there is a reminder that someone somewhere hasn’t been forgotten. As the wall slowly decays, the memory stays.

The article can be read here. In it a little insight to the artist, the meaning behind the art and what is being done to restore the fading artwork:

The salient message, “40,000 years is a long, long time/ 40,000 years still on my mind …” is inspired by Joe Geia’s song, “40,000 Years”. “We were trying to say that even before Redfern, Aboriginal people have been there, have been in that area, have known this country, this place,” Ms Ruff said.

Walking by the piece it is a shame to see the decay considering the proposed restoration in 2013. Maybe it did see some work done and four years is enough time for more weathering. It isn’t my area of expertise sadly but I hope a team with a passion for art come and bring it back to life before it loses the battle with time, a battle that has taken so many incredible and powerful civilizations with it.

7 thoughts on “For the first time in our history…”