I was working at 3pm yesterday, so this was more of an ‘Australian Afternoon’ experience. I took a walk around Sydney Harbour to see what it was offering for those that were there before sunset. Despite the cloudy day my sensitive eyes started stinging from the constant looking up toward the helicopters as they dragged huge Australian flags behind them. I am unsure if you know the layout of the Opera House but I went into the shaded section underneath the main stair set (that leads to the main entrance) to rest my eyes from the occasional bright sunburst through the clouds and to check the photos I had taken.

It was then that I heard a huge roar of engines overhead and I knew that this would be related to the day. I got up and walked back into the open to see a huge Qantas Airbus A380 emerging from the low clouds. It was certainly a sight to behold.

I can only image how good this looked from the Harbour Bridge. I also wonder how much it cost to participate in the climb on Australia Day. It would certainly be a sight to remember!

Lining Circular Quay were two flags. One, the Australia Flag that many know worldwide.

Next to it, the Australian Aboriginal Flag.

This is a flag that was designed in 1971 and is a symbol of the Aboriginal people of Australia.

There is a some controversy around Australia Day. Some celebrate the landing of the First Fleet by the British back in 1788. Others label it ‘Invasion Day’. I won’t use this post to talk about this, if you want to read a little more into the controversies and history of the day, this can be read here.

Back to the Harbour. A very busy harbour with boats.

A very busy harbour with helicopters. 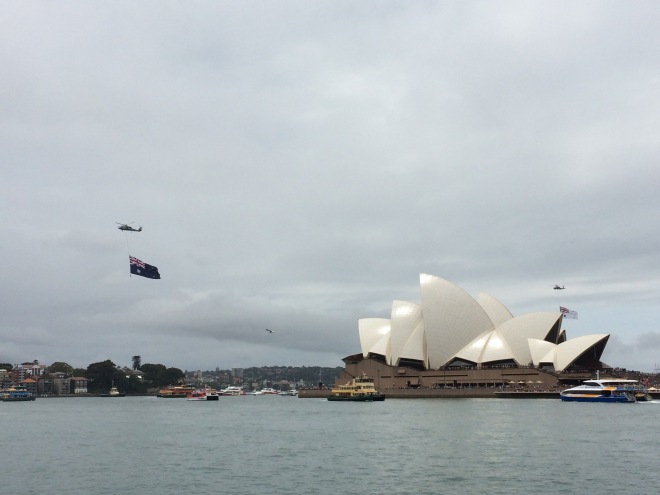 A busy harbour with unicyclists and 8 foot tall women equipped with tennis balls that are a danger for any faces in close proximity.

Even for midday, the place was full. There were a bunch of stalls to keep people fed and hydrated. There were a bunch of people giving away both sets of flags and it seemed like people were happy to fly both at the same time. It was nice and I didn’t feel any kind of division, maybe there were protests elsewhere but Circular Quay had a very happy and chilled vibe.

Now, the best view for me personally was to cross back over from the west side of the quay to the east and Opera House. Climbing the stairs and looking east was pretty impressive. Boats and boats and boats. And a cruise that seems to be anchored away from the harbour to free up the space for the evening fireworks show. 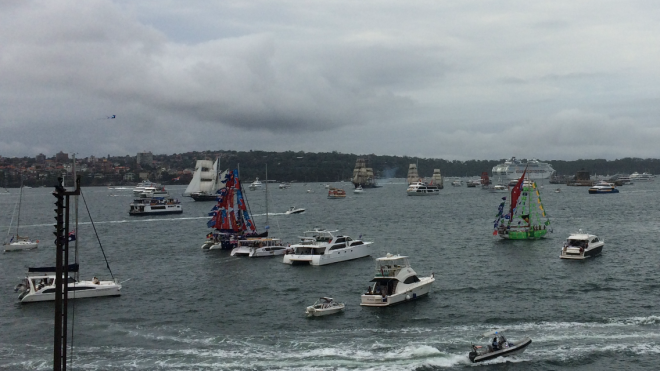 Unfortunately, this was the last of my Australia Day. I did enjoy the fireworks on the evening from the large windows at work, although pretty obscured and I have no decent footage. It was a very decent show considering how recently the New Years Eve fireworks were fired, and although a lot smaller in budget, was definitely worth the visit for the thousands that did. Here is a nice shot from ground level from an uploader on YouTube.

Did you do anything for Australia Day?

Also, happy belated Republic Day to any Indian readers! I work with an Indian girl that was watching the Republic Day parade live on YouTube, also shout out to Matt for reminding me on WordPress.

I hope you enjoyed the update and the 26th January, whatever it meant for you.