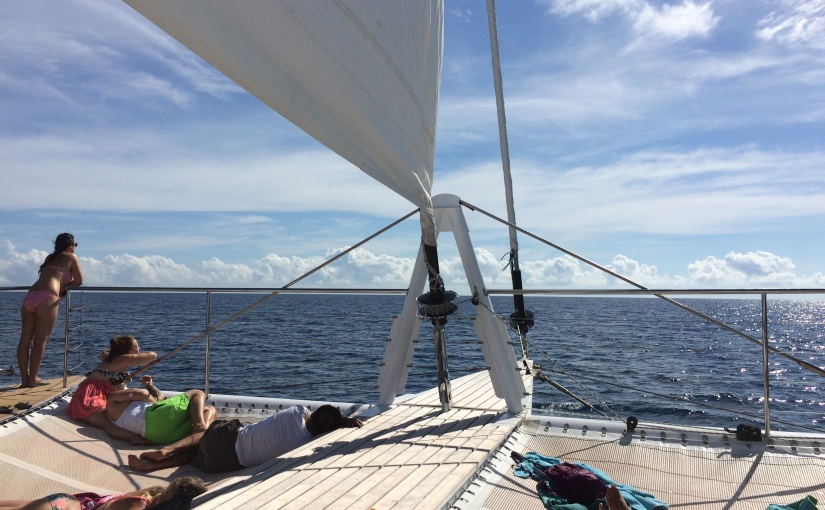 So I have been a little absent from WordPress the past week or so for the reasons explained here, not that this has been a time of procrastination but rather to the contrary. That being said as much as I have had fun, I am pleased to be able to relax in my own bed.

This was the moment I realised I was on holiday. 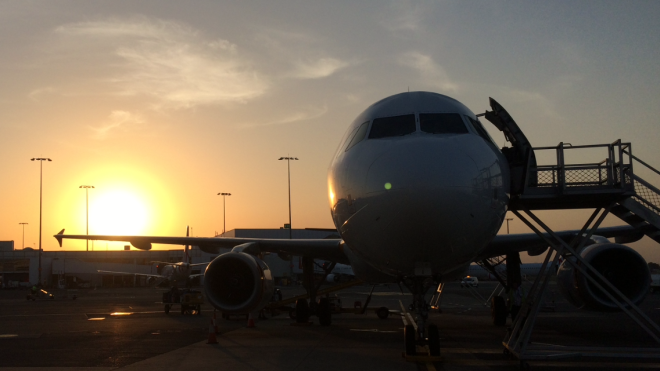 I found Cairns- much smaller than Sydney- to be very sleepy in comparison. Surrounded by beautiful coastlines, dense rain-forest and low rise buildings. It also looked remarkably grid like compared to Sydney’s winding streets and this made it fairly easy to navigate. The noise from the busy Sydney traffic was replaced by calm but for the occasional noise from a helicopter tour.

This was until we reached the hostel. Don’t get me wrong, this is a fantastic hostel and one of the main reasons I had such a great experience in Cairns was down to the accommodation. I want to get that out there first, and I liked it so much that here is the link to Gilligans. That is of course only if you like hostel living. The perks of this place are that you are located close to what the city has to offer, the hostel itself has a travel agent that helps organise your tours to the Great Barrier Reef and it has a ‘Workers Wanted’ desk that assists on helping backpackers that want to find rural work to get their second year visa. Other perks include $11 jugs of beer, $5 dinners every night (I thought these were great value) and nightly entertainment. During the day, the hostel has a good vibe. Not too busy, not too crazy. By nightfall, expect what you would expect from a nightclub. What would you expect from a hostel? I haven’t stayed in many, however I am sure this is up there with the best I will stay in.

We had an upgrade to a 6-bed dorm, great considering we had four in our group.

Views were decent. We watched the Crystal Serenity dock one day and one of the bridge commanders actually stayed with us for a night in one of the two spare beds. Me and a friend then decided his night off would be spent telling us all about ships and life on the waters, although he seemed to enjoy the conversation. It is nice to see the passion some people show in their roles.

On the second morning myself and my friend Victoria arranged to do the Great Barrier Reef. It would be silly if we didn’t of course, and was the one thing we had on our list. It is very high on the bucket list too, as it is for many people. One thing we agreed on was that we would only snorkel, as we feel a little uneasy diving. Jumping into water with a heavy load makes me feel as uneasy as we did sailing with a hangover in 35c heat.

This of course was justified when looking at the views of the slowly fading landscape. 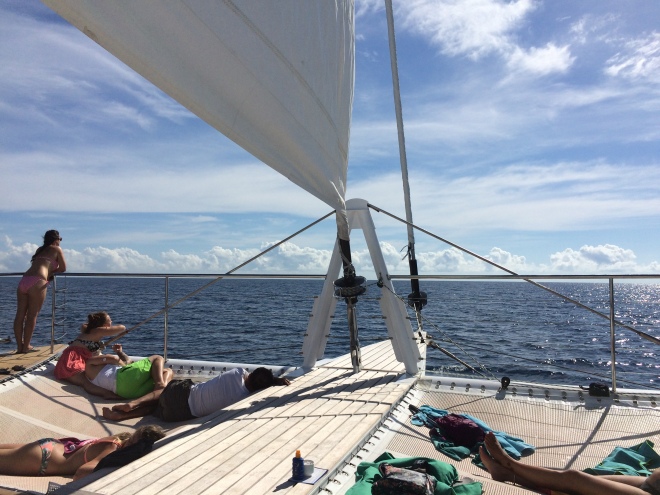 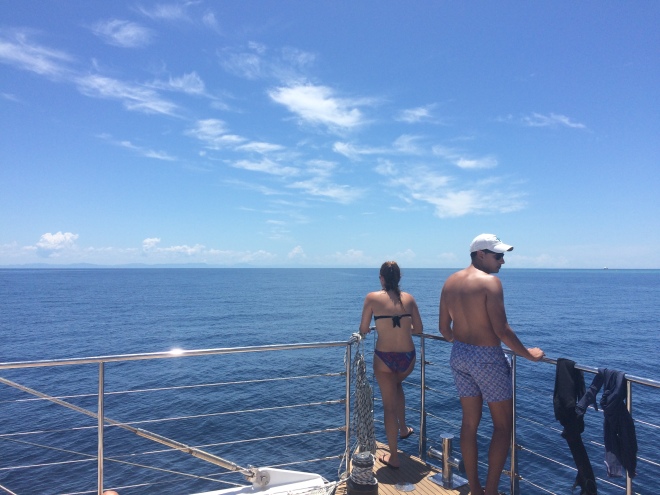 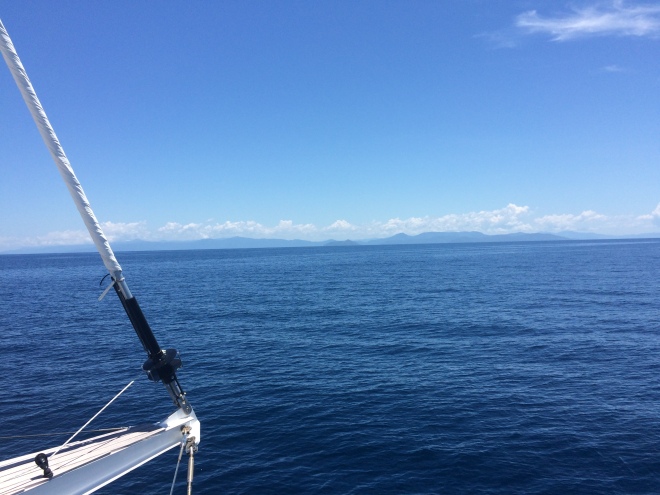 Now this trip was amazing. For $170 per person, we sailed at 8am and arrived back on dry land at 5pm. This included a fantastic lunch, a great team of professionals and a $10 tab that I decided to use on a beer and a snack. The real shame was that both of us felt a little too queasy to go to town on the chicken carbonara and veggie curry, but we gave it our best shot. The quality of the food meant we ate a plate and a half even though our bodies threatened to throw it back up anytime. This was after our first swim though, which was amazing. They took us to two separate reefs, one that they said was the best and was decided upon due to the great conditions. Our conditions were better than they have been for a long time according to staff, and the images really do back this up.

The second reef, nothing but darkness looking down. This was a longer swim to the coral, surrounded by jellyfish whilst protected by a stinger suit. After a good few minutes swim, the water became much more shallow. Swimming back was amazing when looking at how the coral suddenly ends at a cliff face and plummets into a dark abyss. I couldn’t help but imagine a shark swimming upwards from the darkness. Hopefully I will obtain the GoPro underwater shots from my friend soon to show you. Part Two perhaps coming soon?

As much as I enjoyed the trip and the incredible sights underwater, it was great to step foot on dry land again. I won’t forget the Nemo’s, the bright blue starfish, the huge coral and the great people that were alongside us. Some found baby sharks and turtles, and for that I will be forever jealous.

The following day, signs for a full english breakfast were a welcome sight.

This spider scared the crap out of me.

This tree (or trees?) caught my attention. 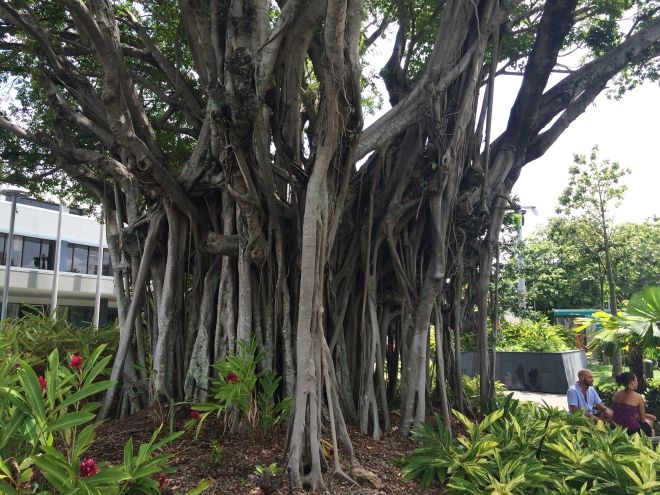 And this drunk person is me. You can only have so many $11 jugs before gazing at a storm and wondering how hard lightning would have to strike before you gain a superpower. 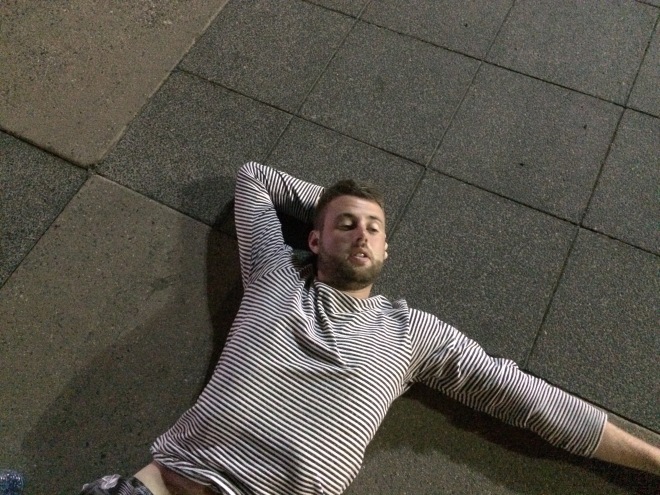 The weather remained fairly stormy after this, not that I cared after having such great weather at the reef. If anything it added to the images. 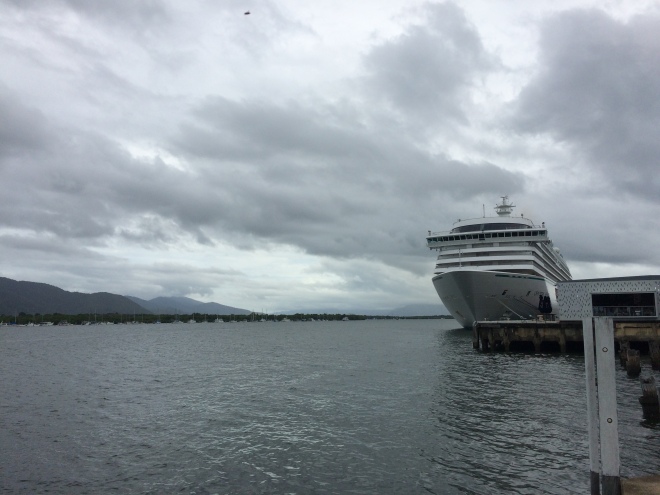 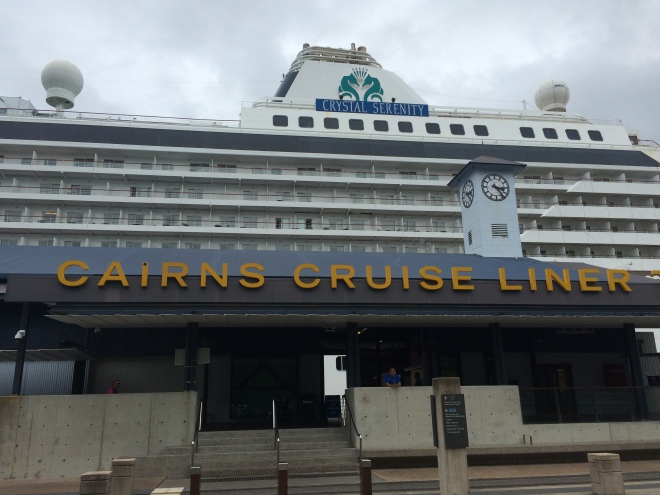 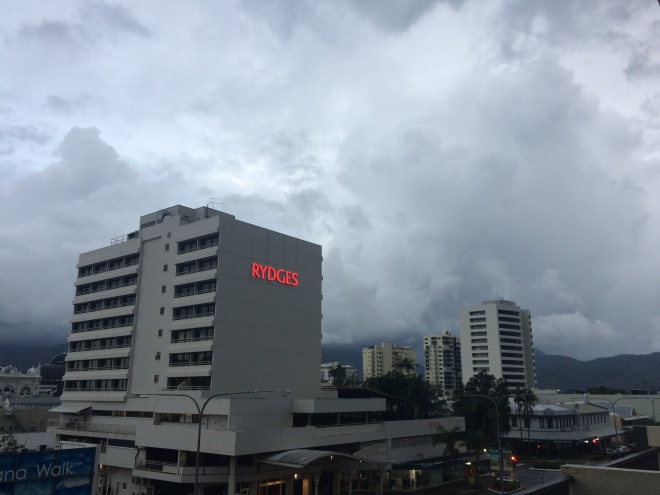 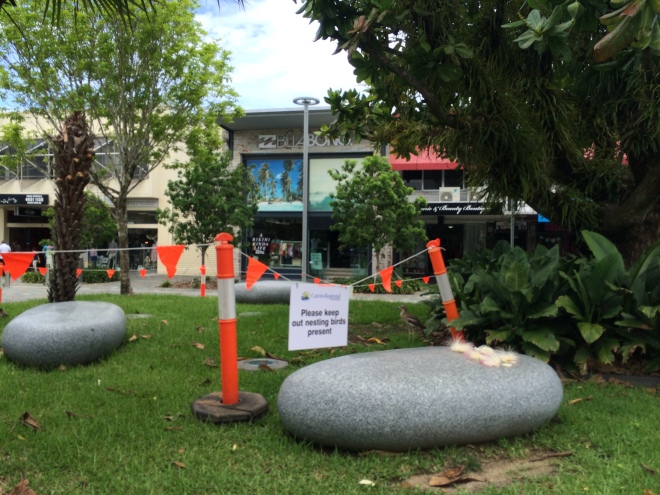 Birds nesting above, a plane seemingly on fire upon boarding below.

I didn’t think this would happen, but I felt upset arriving back ‘home’. Not that Sydney is my home, however it is for the time being. I realised I was going back to work and back to my current normality, recovering from sunburn and bank overdrafts. It is funny that this still happens on a working holiday visa.

I loved Cairns and I hope to go back. Great memories with great people, an unforgettable experience at the Great Barrier Reef that so many people have sitting at the top of their bucket lists. Don’t worry, I am trying to obtain the images underwater from my friend although we are having technical issues. Until then, I hope that you enjoyed the ones above the surface. 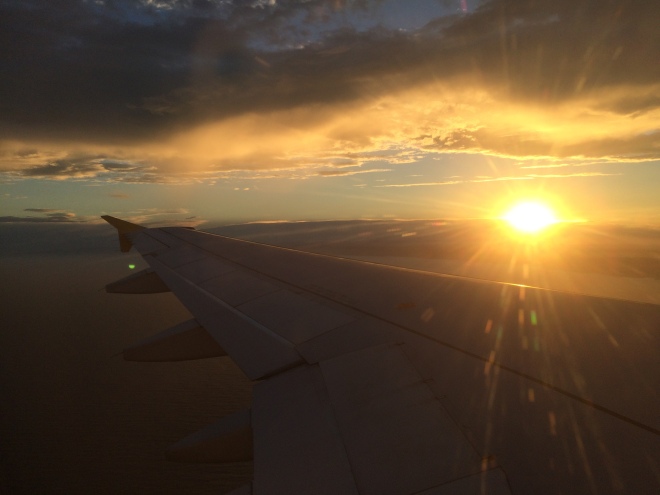 18 thoughts on “Travel Diary: Cairns, and perfect weather at the Great Barrier Reef!”