During our trip to the Blue Mountains, we were recommended Station Bar and Woodfired Pizza, named due to its location close Katoomba Station and well, pizza. It was a great recommendation as the menu was crammed full of fantastic sounding pizzas of all variations. I went for something I have never had before, let alone on a pizza.

This is the ‘Bullaburra‘, a delicious pizza consisting of ‘Saltwater crocodile with wild lime ginger marinade, coconut béchamel, baby spinach, roast red capsicum & a wedge of lime.’. Tasty was an understatement, and certainly something I haven’t tried before. I am a strong believer in trying things I haven’t already and I am pleased I did. There are gluten free and vegetarian options here too (unsure about vegan options on the menu), so for anyone ever heading to the Blue Mountains your preferences will probably be met.  I think the most interesting thing I have had on pizza before this was probably vodka. Or maybe the fried egg I had on a breakfast pizza once, but crocodile is certainly the winner. And one less crocodile in the waters waiting to kill me to death in this crazy country.  What about you, what’s the strangest thing you’ve ever had on a pizza? Or do you like to play it safe with pizza and stick to what you know?  There are no wrong answers here, and pineapple fans you are welcome.

I have had a very productive morning. I haven’t been able to respond to comments in the last day or so, meaning I had to have an early start today to play a little catch up. My mum very kindly bought me a Groupon voucher as a gift for The Brasserie on the River in Brisbane and I thought today would be a great day to get up early head to the buffet and blog whilst I am at it. She knows I am a broke traveller and probably felt I needed a decent breakfast for once. Thanks mum.

I love early mornings. Despite my reluctance to get out of bed as the alarm belts out, there is no better feeling than a day I know I haven’t wasted. An early start makes the day feel so much longer, and as I am off until Monday afternoon I really need to make the most of my weekend.

I say that, but I have eaten so much that I need another nap. That is what buffets are all about however and I can safely say the scrambled eggs were some of the nicest I have ever had. Still, I always need baked beans to accompany it. I am pleased Australia has accepted baked beans as a breakfast item, I know it freaks some of you guys out. I remember being in the USA and this wasn’t a thing at all! The beans were different too, but I liked them. More burrito filler, less breakfast item.

Do you like them with breakfast? A full english wouldn’t be the same without them. 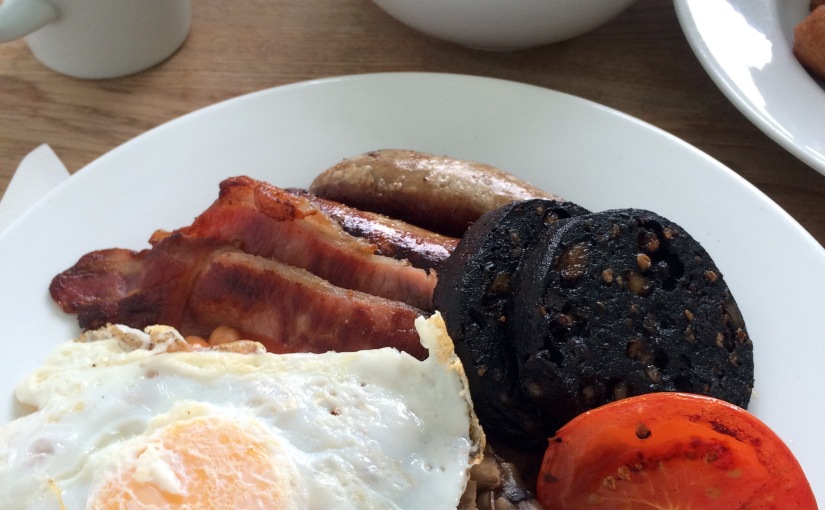 As much as I prefer sunny weather, I love getting up, eating a full English and gazing out of a rain soaked window.

I love it because it isn’t universal. Some people hate the thought of black pudding or baked beans during breakfast, maybe opting for fresh pieces of fruit looking out onto palm trees and crashing waves. Sadly I cannot have that today, but there is a great cafe hidden within my apartment complex that does a lovely fry up. 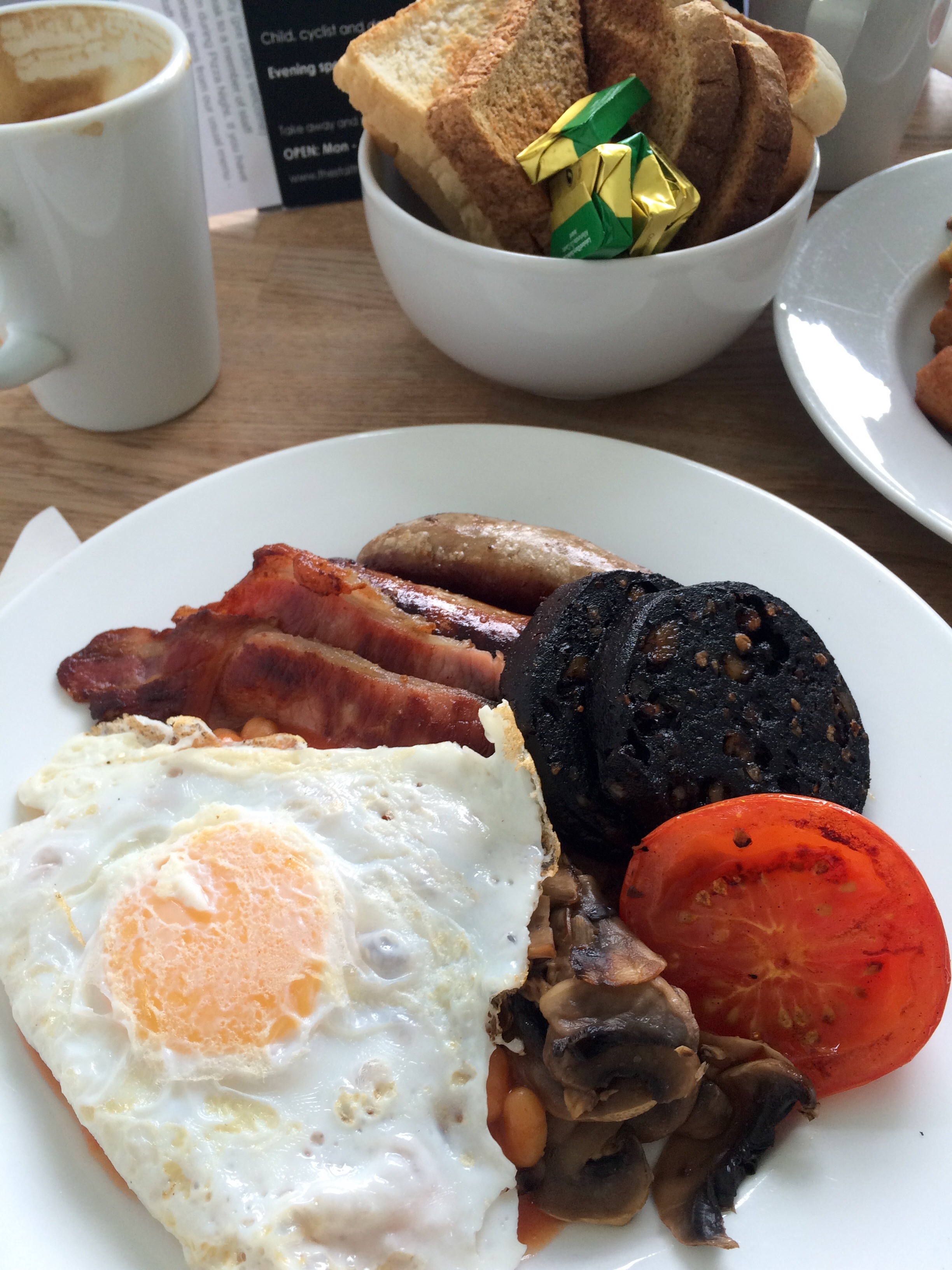 As much as I desire civilisation to merge and rid ourselves of the cultural bias that has us thinking differently and constantly at war, I love how our tastes and home comforts vary. I love how some people have never tried baked beans on toast and may one day give it a go on a trip to the UK. I love how there is still so much I haven’t tried and will do for the first time in, hopefully, the near future.

It is seemingly paradoxical that I love to travel and experience other cultures, at the same time I wish to live in a world in which ideologies don’t continually divide us. Sometimes my blog may seem to contradict itself and my thoughts may do the same, bare with me!

Hang on, was I on Route 66? Looking through my Texas pics I noticed the signs below the giant cowboy, even if they didn’t catch my attention at the time.

Apparently not. Well, kind of. I asked google the question and the website route66news was kind in response.

That’s enough for me to brag about! 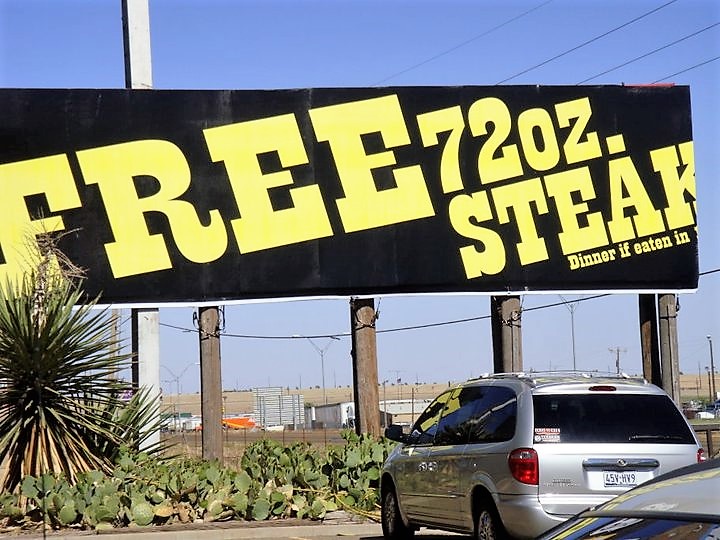 Although the Big Texan no longer sits on Route 66, it began on Amarillo Boulevard (aka Route 66) in 1960 and often shows its Mother Road roots in the gift shop and decor. It moved to Interstate 40 during the early 1970s after Route 66 was bypassed.

‘A solid argument can be made that the current Big Texan sits on or adjacent to the 1926-1928 alignment, which followed 18th Ave SE in from Washburn. The current freeway obscures much of that now, but the BT is one of few businesses to be able to say it has sat on two different alignments.’ 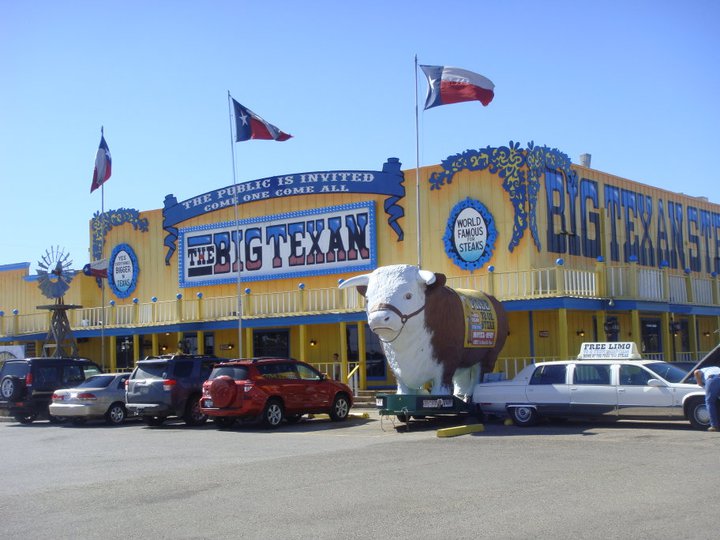 Have any readers been? I miss that place.

Even if I haven’t been on it I have visited a venue that has contributed to its legacy, I wouldn’t be researching the historical route right now. I guess that’s just as good as being on the route and not realising at all.

Glass half full and all that.