Today was the first day I walked over London Bridge since it reopened. Maybe because I have done a dozen times already and I don’t actually need to. Just for photos. Maybe it was the uncomfortable feeling I still have inside me about this specific bridge following the recent stabbings. Probably a combination of both. 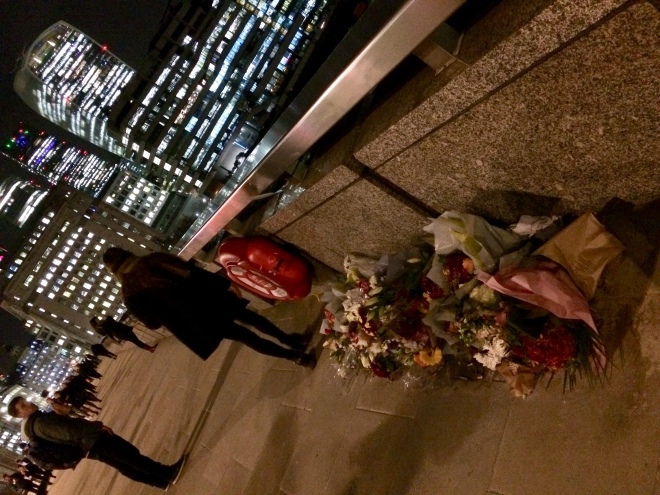 December has been pretty uneventful for me. London looks stunning at Christmas (I posted here about the Regent Street Christmas Lights), but a combination of flying back home and needing to buy gifts leaves all my exploring and discovering until 2020. That being said, I have been able to see some friends and enjoy the winter markets. 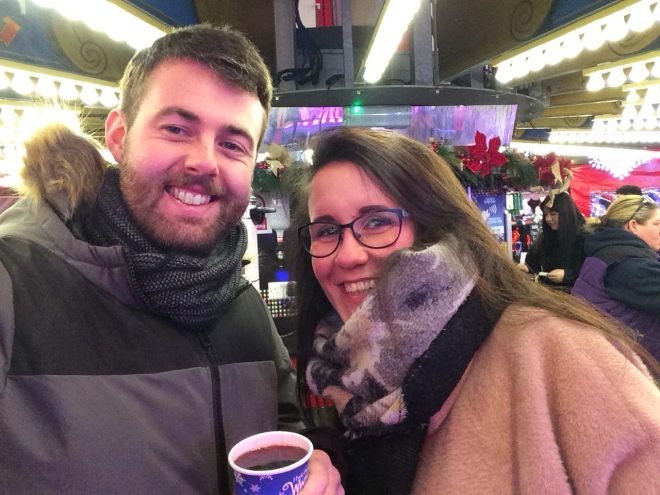 This is Ola, both heading for the mulled wine after a crazy shift. This was in a rotating bar in Winter Wonderland, a huge Christmas market I will link at the end of the post. It is great for all ages… families and grown ups with no kids. Rides for those that love a little dose of adrenaline often seen at your local fairground, cute little stalls selling everything you would want to find in your Christmas stocking. 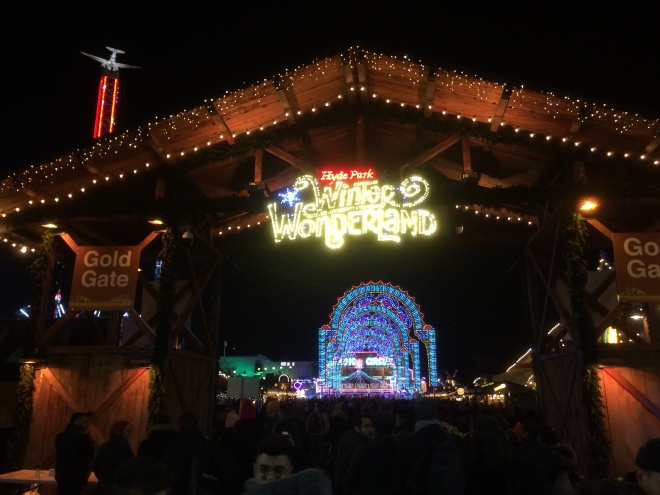 A whole Christmas dinner in a burger…

More huge people, this time a hillbilly enjoying a bit of VR. I dread to think what’s playing…

London is full of mini versions of this market too, all dotted around the city. Trafalgar Square, Leicester Square, South bank and all the ones I haven’t found yet. I am not sure if they are all owned and organised by the same people but they look pretty similar. Not that I mind, there is only so much they can do to stand out. A cosy wooden hut selling mulled wine from a cauldron, what more would you want? 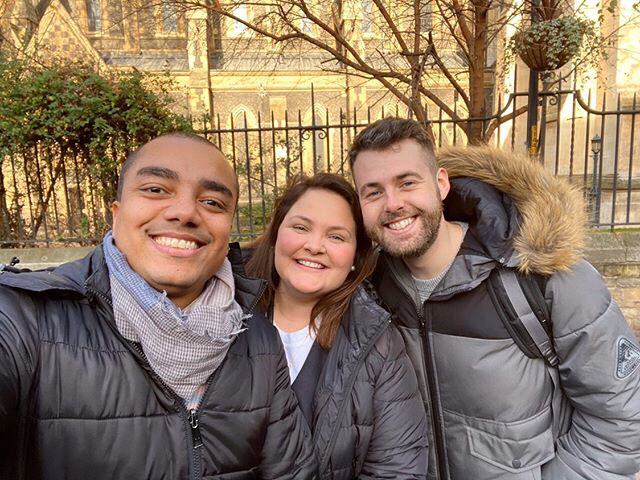 This is Marcio and Maiana, a beautiful couple I met in the UK a good few years ago. My then flatmate and still very good friend Paul had them stay over our place when they visited the UK, travelling Europe and taking some time to visit out small corner of England. Paul and Marcio met during an event in Disneyland Florida. After spending a very fun few days showing them Newcastle, Durham and our regions castles I was very grateful to be a guest at their wedding in 2016 (they even gave us a shout out during a speech!) in their home of Sao Paulo, Brazil.

This time, we met in London.

And back to my post title. What I love so far about London is that it is such a popular destination for both Brits and international visitors, anyone that I have met on my global travels will probably visit this city if they come to the UK. It would be weird if they didn’t. Being as hectic and crazy as it is some people think it is too much, and this is something I hate about London. For those making a first visit to the UK this may be the only place visited, and if they don’t like it’s fast paced, car honking, crammed, occasionally rude and expensive nature, this is the perception of the UK they take back home. But the UK isn’t one city, even if it is by far our biggest. Whatever you don’t like about London, another British destination is begging for your attention.

But I am pleased we have London. For everyone that doesn’t like it there is a million that do, and it’s attraction is a very good reason as to why I have seen some people I probably wouldn’t have if I was living elsewhere. 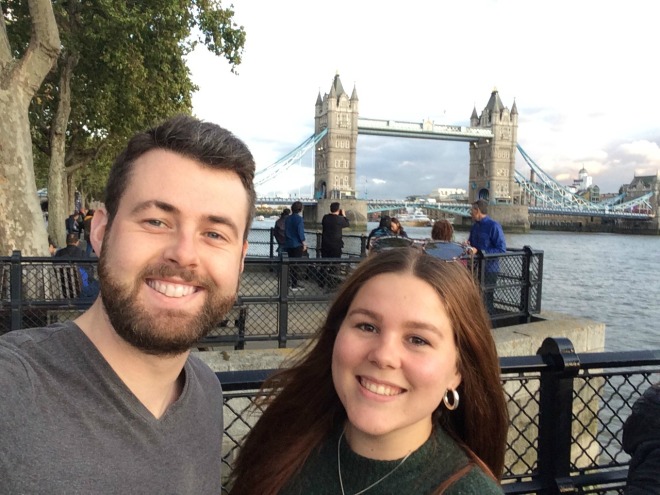 Above is my friend Laura. We met when I started working at Sofitel in Melbourne, she recently moved to Sweden and waited in the UK as her visa was pending. She got it and off she went. I was also meant to meet my a colleague from Brisbane however unfortunately my shifts wouldn’t allow it. A couple of other friends are heading this way in the next month or so too which is great. I hope to see them.

As I have said in the past, what I love about smaller cities is that it is so easy to make arrangements to see friends. A reason why I loved Brisbane so much. Every possible meeting place is relatively close by and it isn’t unusual to bump into friends in the street. But these are people already living in the city. I never expected to meet so many friends from outside of London, in London in just a couple of months. I had a coffee chat with my previous manager from Newcastle last week as well, now working just a couple of Northern Line stops up from me near Old Street Underground Station. Bumping into people in the street is rare among the millions of tourists. But in this age of social media meeting up is easier, especially in one of the worlds most visited cities.

No matter where you are, take a moment to check social media. You never know who is around the corner!

Thank you for reading, and I hope your lead up to Christmas is more merry than manic. Let me know what you’re up to, and I will see you all in the comments!

About me   Introduce yourself 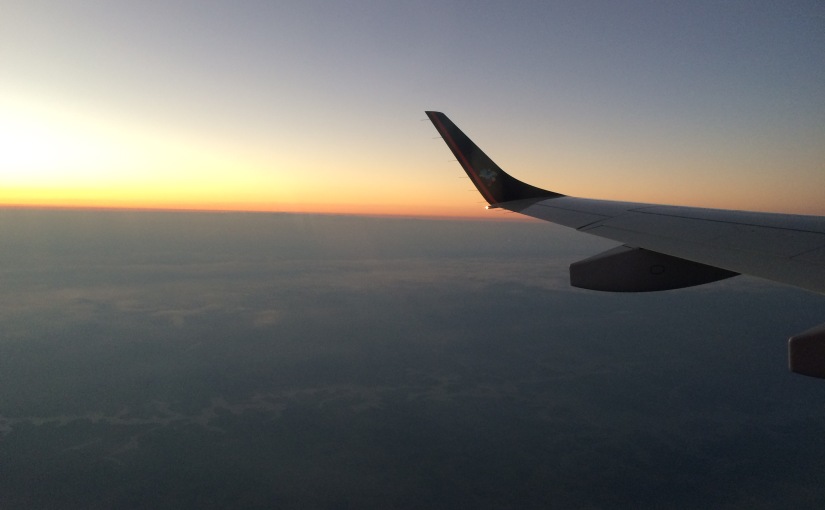 One of the things I will miss the most about living in Europe is the variety and diversity. There are plenty of countries within, and these countries are small compared with some of the mammoth nations some of you may reside.

A two hour flight in any direction will almost guarantee you a different language, traditional national dish and with this, a great time.
I cannot wait for the weekend to be over and to make the most of this. In three days time I will depart northern England and with barely enough time to watch an in flight movie, land in sunny Spain. It has been a while since I have travelled short haul, it is nice to sit back and relax without the worry of what I am going to wear to get me through a 14+ hour flight. If you haven’t travelled long haul, choose comfort over style and thank me later!

My flatmate travels regularly throughout Europe with his job. I feel he is incredibly lucky. Then again he isn’t, if we see our careers as fate decided by the Sorting Hat, where does our ambition come into it? It doesn’t and like a muscle, if it isn’t used it starts to fade.
A group of us were chatting around the kitchen table two New Years Eve’s ago about the year ahead. My  travelling friend mentioned his trip to Germany for a conference amongst other trips. This caught the attention of another friend who is a pilot for a low budget airline in Europe. It turned out they were on the same scheduled flight, my pilot friend and my business travelling friend. How cool is that? The pilot insisted that he would do a call out, full name and all, claiming to have a very special passenger on board, special because he was the Duke of a town nearby. He stuck to his word and from this day on I take everything I hear from a pilot with a pinch of salt.

It cannot imagine having a friend in the cockpit of a passenger jet I am flying in, the same friends I wouldn’t trust to hold my phone for a second.

Keep your friends close, your enemies closer and your pilots in a very good mood!