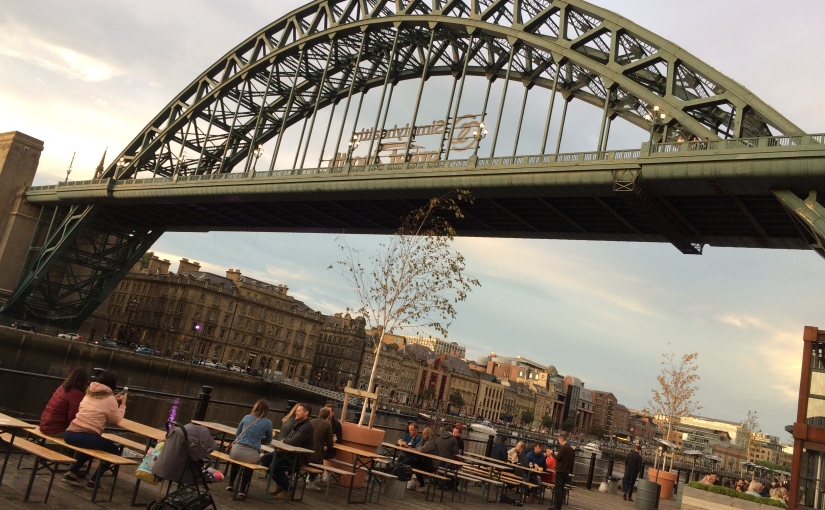 It was time to leave Germany, my flight was later in the afternoon and I also found a picture of our previous Prime Minister upsidedown just as I was leaving the hostel. 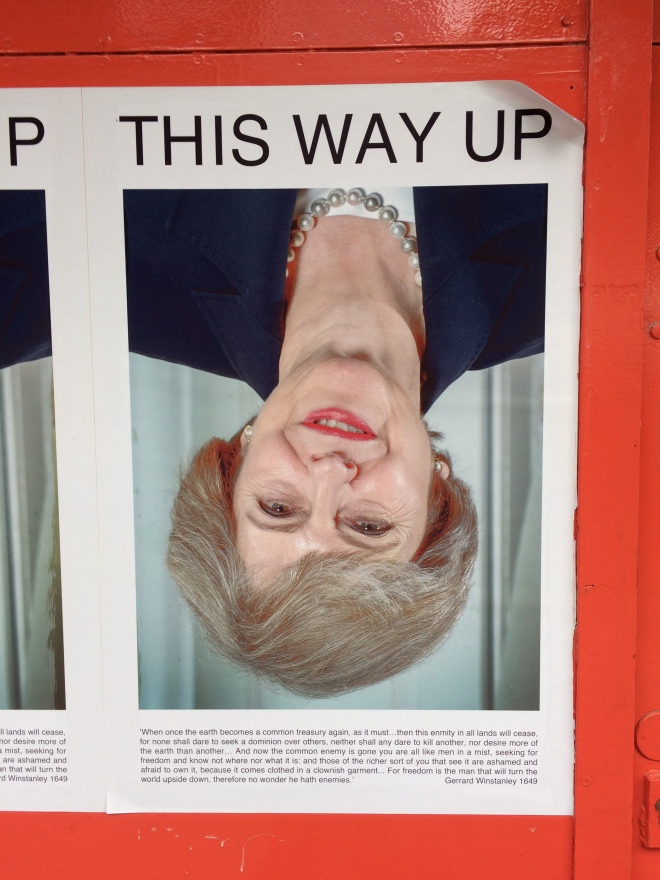 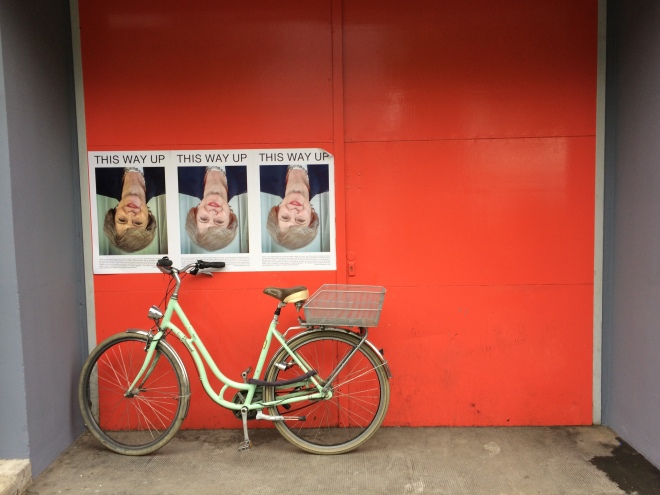 And as I was waiting for the train to the airport with a snack that I mistakenly thought was some kind of hot dog, I was excited to be back home again with a cup of tea and some more family time. 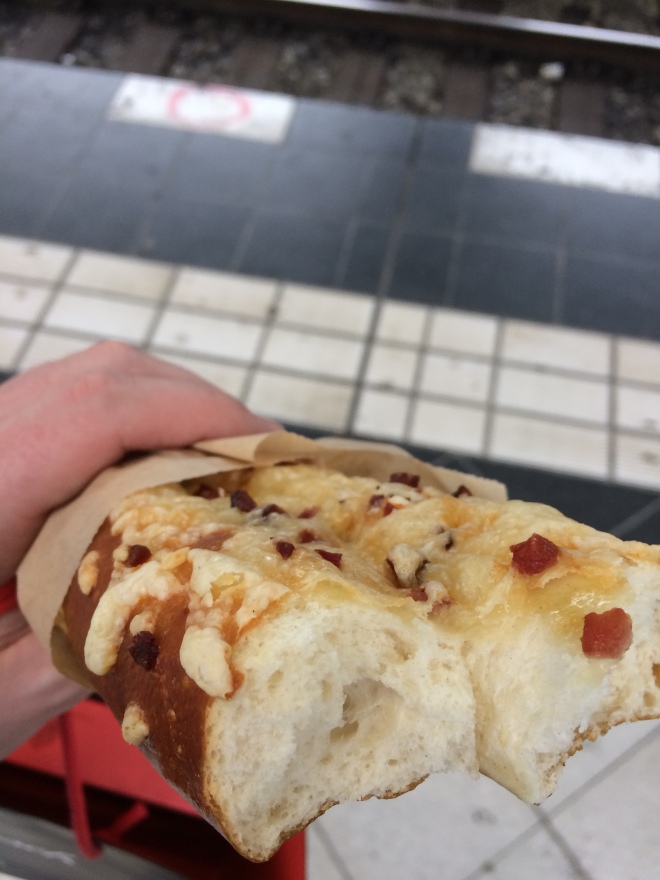 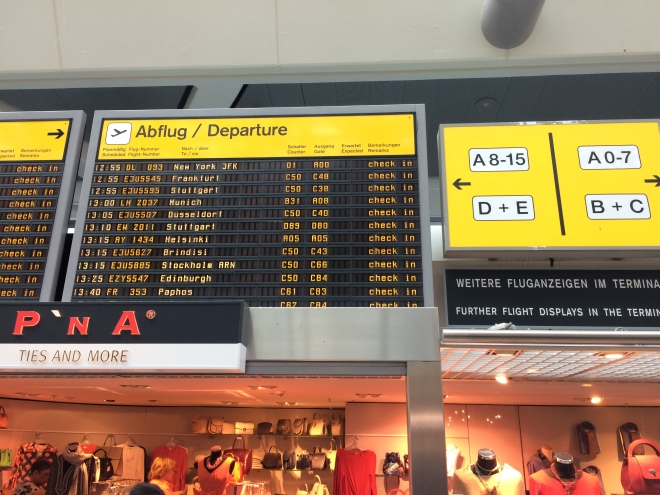 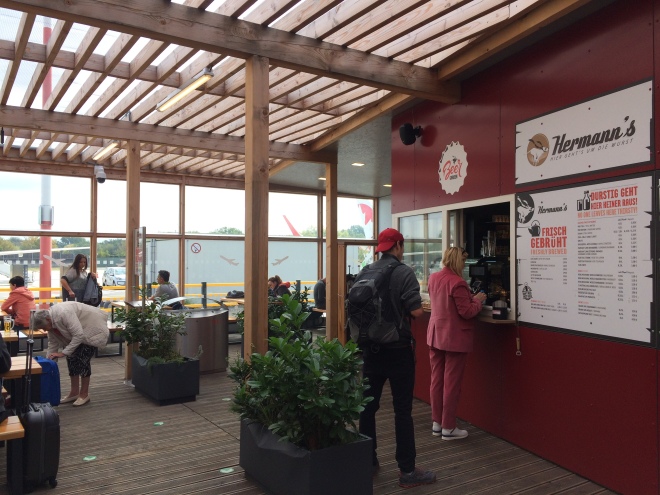 I chilled in this little area of the airport, and got the second and last currywurst of the trip. I ended up talking to a lovely scottish couple from Edinburgh, they even offered me a pint as they went to the bar which was lovely. I politely declined but remained chatting to them until the flight. 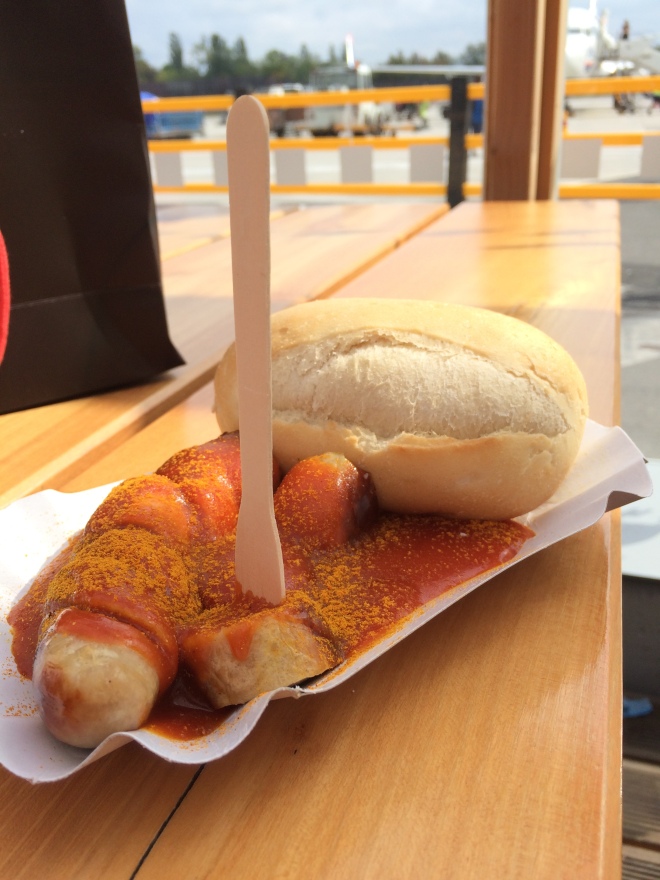 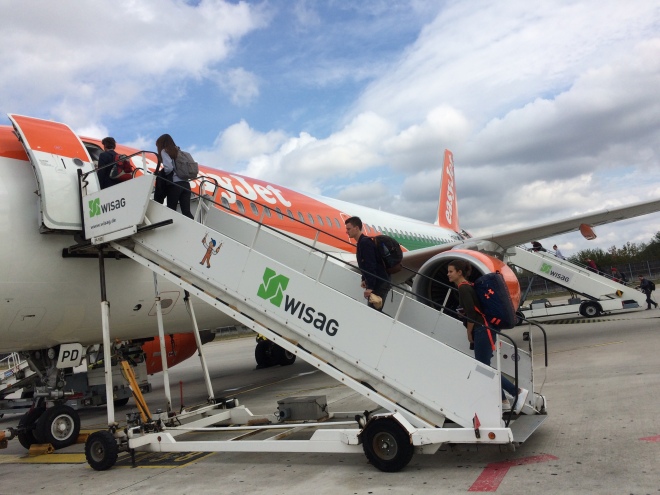 The flight was delayed, the captain however was apologetic and honest about the delay. I cannot remember exactly what it was but it was human error and some break up of communication that caused it. But we took off and in no time back in a cloudy Edinburgh. 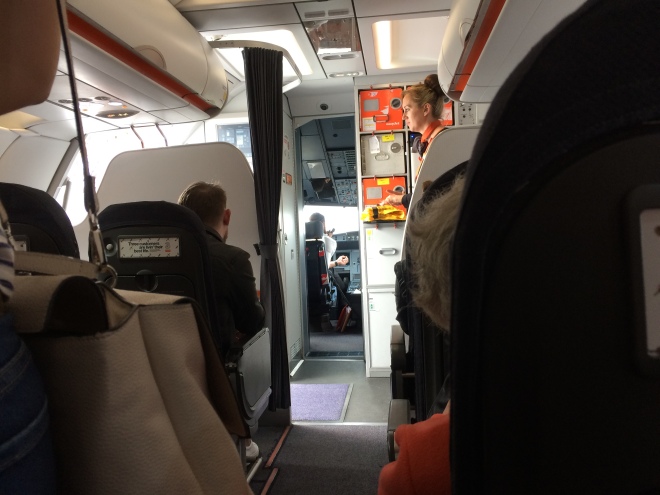 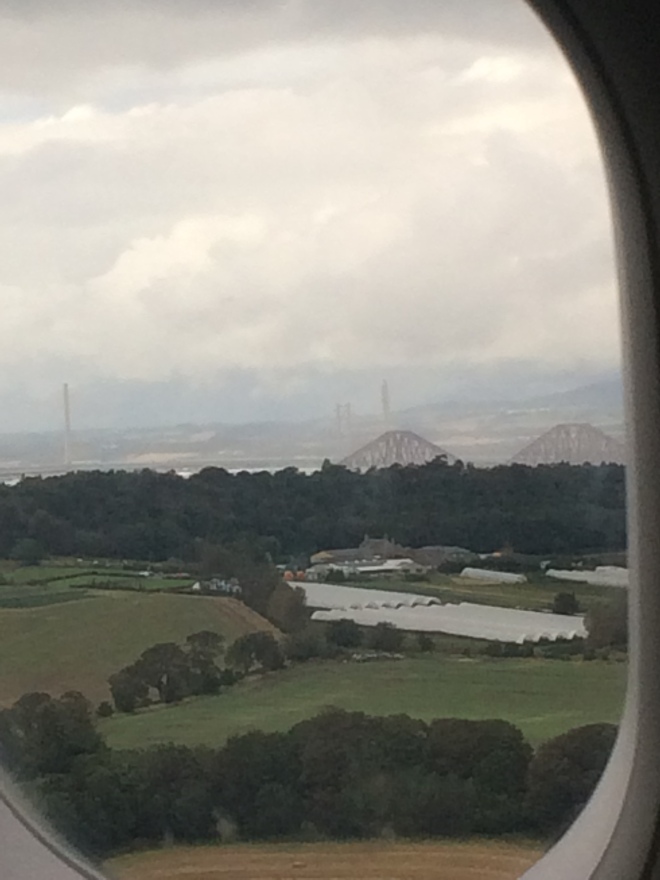 I love the bridges you can see from my window as we were approaching, three can be seen over the Firth of Fourth. The Fourth Bridge, Fourth Road Bridge and newly built Queensferry Crossing (furthest away in the shot below) can be seen in my shot. The one underneath is by a photographer I have linked at the bottom of the post. I have mentioned these bridges a couple of times in my blog as they were used in Grand Theft Auto: San Andreas. One of Rockstars HQ’s is in Edinburgh. More info on these impressive structures can be read here. 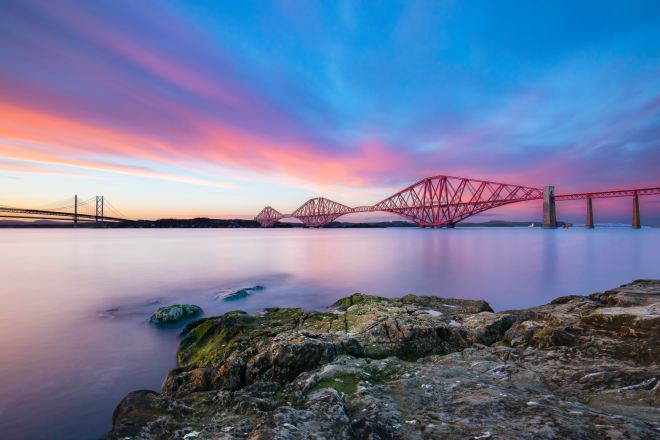 And to a bridge a little closer to home. Newcastle has seven bridges over the River Tyne, linking Newcastle (left in shot below) to Gateshead (right). They have a great history of their own, the main bridge below- the Tyne Bridge- built by a local company that went on to build the Sydney Harbour Bridge. Interestingly I have just learned that the bridge was desinged by the same company as the Fourth Road Bridge. The white one behind it is the Gateshead Millenium Bridge, it tilts to let boats through. The Swing Bridge in front of the Tyne Bridge, you guessed it, swings 90 degrees to allow boats to pass. The bridge I was on is the High Level Bridge, a Grade I listed structure. I was on a train at the very top, below it is a road. The dual purpose bridge is an impressive size and length, opened in 1849.

This site linked here gives an insight to each and a ranking, in their opinion, of the best to worst. It would be great to know what your favourite is! 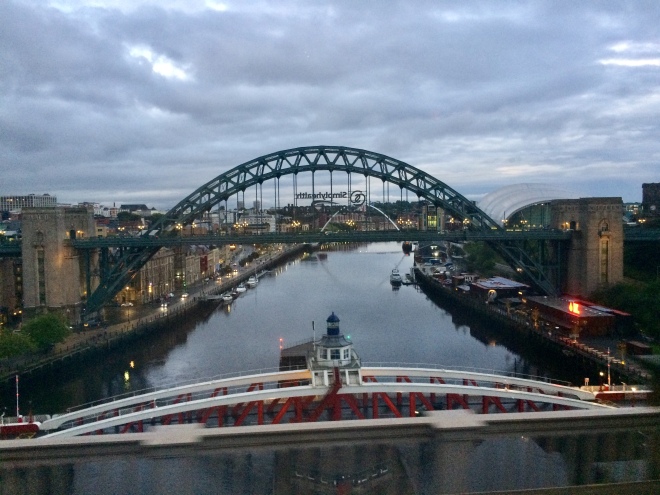 The weekend after my trip was a great one spent at home with my mum. I also met with friends to play a game I have never played before. 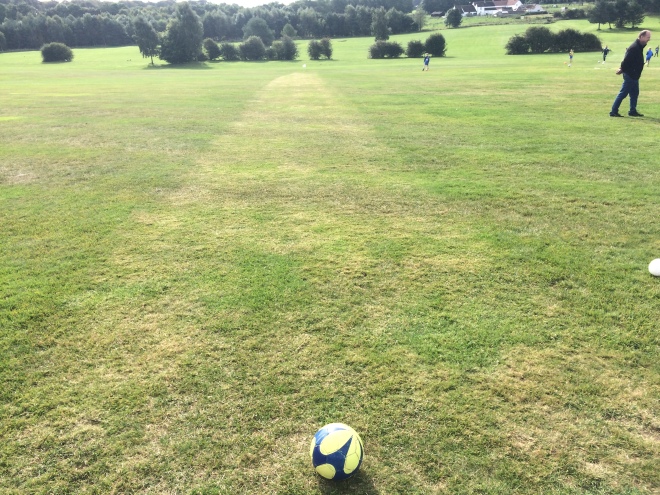 Mixing football (soccer) and golf, it was pretty fun despite being a little windy. I haven’t played football in at least two years, and it was obvious.

I wasn’t the one to put the ball in the water however. Not in this shot at least. 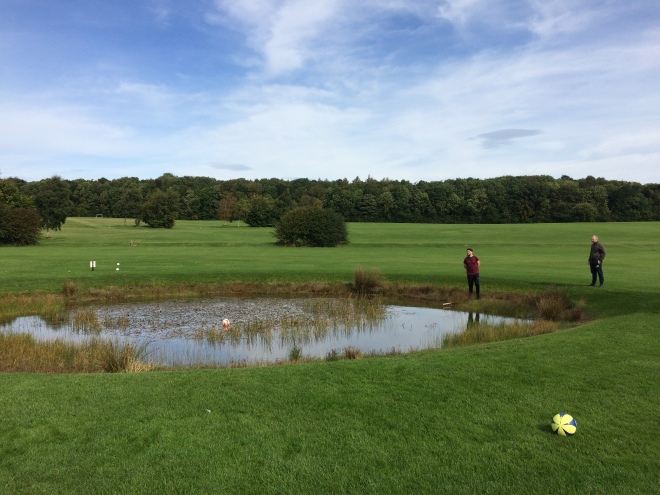 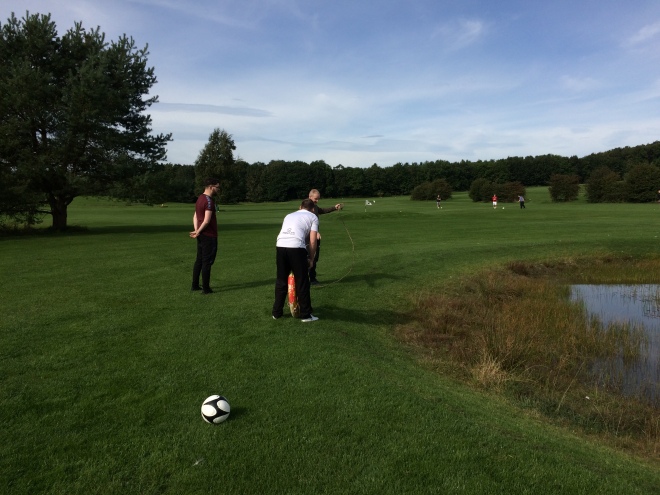 Using the lifebelt wasn’t a wise decision but it was a logical one. We kept hold of it and even if the rope cut, one of us would have taken one for the team.

It didn’t work, we put the lifebelt back and got another ball. 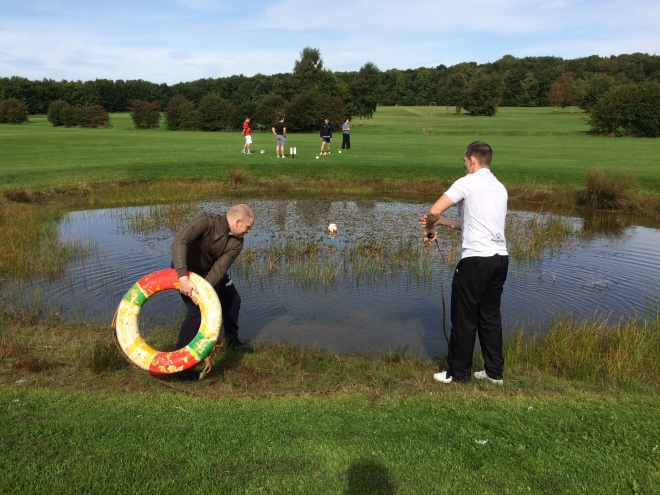 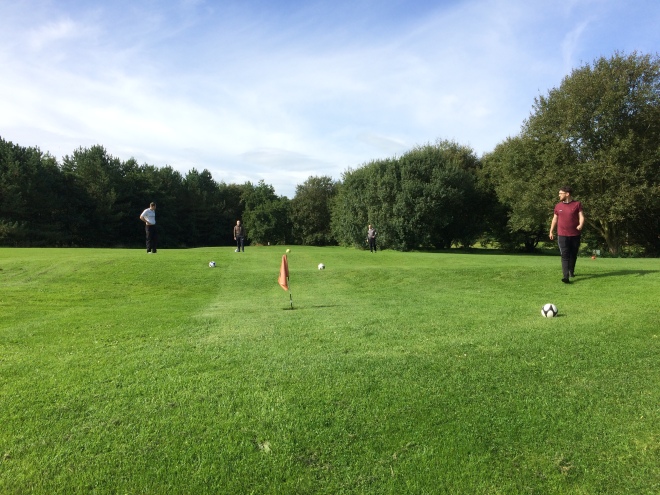 Despite being fun and something different, I couldn’t help to notice the holes were very similar, apart from maybe a couple. I think incorporating a more mini-golf style would have added more fun to it and kept it from seeming a little repetitive.

Anyways I got back home, very briefly, and got some energy back by getting my mum to open the chocolates I bought for her in Berlin. They were good. 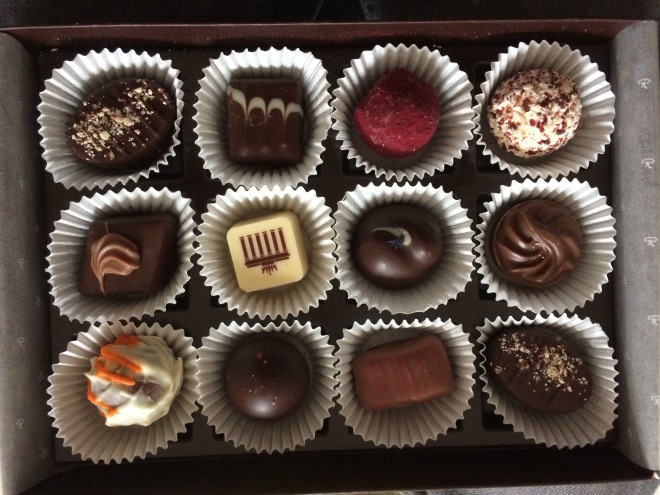 And one thing I love about being home is the scenery around us. All rural and with the odd hot air-balloon over head. By cropping the house and lines out of the shot it reminded me just how small we are in the grand scheme of things. 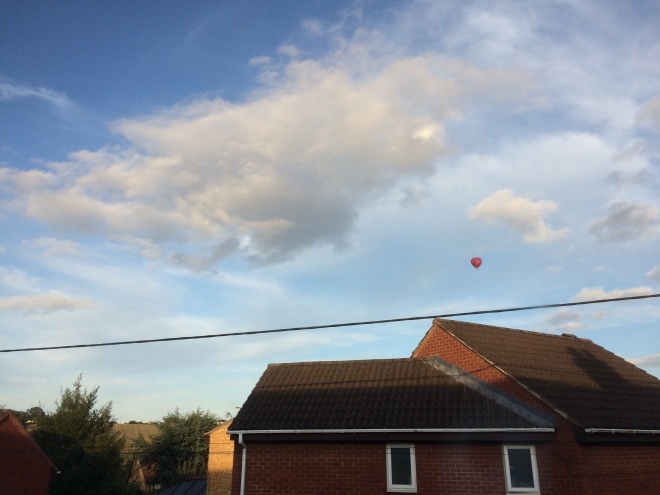 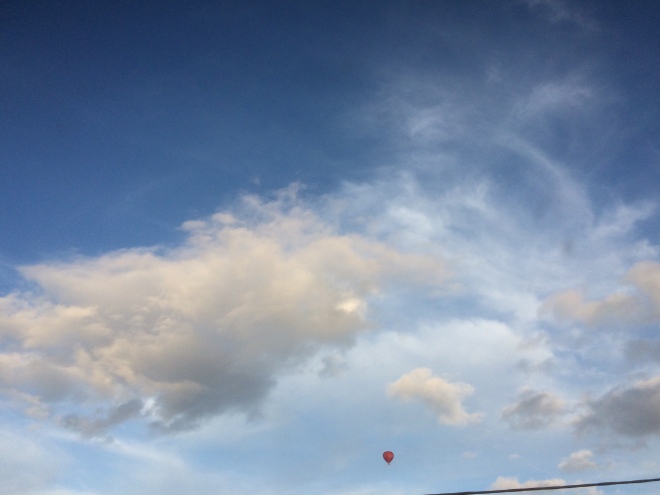 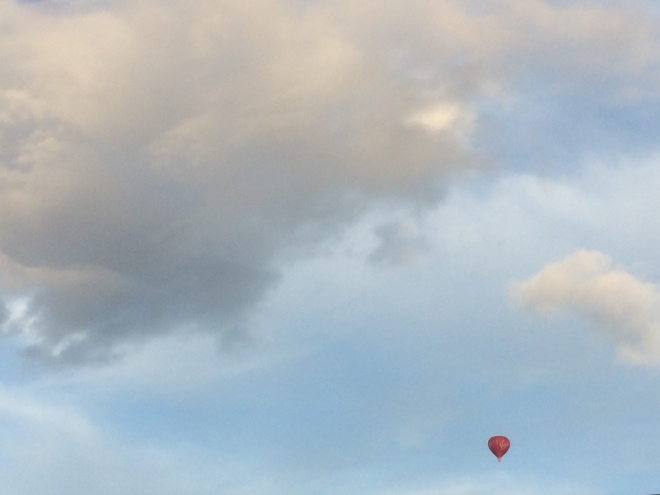 I could never do a balloon ride, as amazing as it must be. The thought of being so high up in nothing but a basket terrifies me.

And not long after this me and the lads went for a couple of drinks in Durham. We went into a pub with a ‘no phones and laptops zone’ which I guess was refreshing so no shots form there. And sadly I couldn’t stay too long as I agreed to meet some friends back in Newcastle that evening. But as it is only a ten minute train ride between the two cities I left the pub, took a quick drunken selfie underneath Durham Castle and Cathedral and boarded the train.

I arrived in Newcastle, and had to take the shot below for a friend in Melbourne. Tup Tup (a nightclub in the city’s Diamond Strip) was well known in Australia because of the show Geordie Shore. I’ll be honest I have had a couple of fun night’s in there, and used to check in one of the cast regularly as I worked in a hotel nearby. 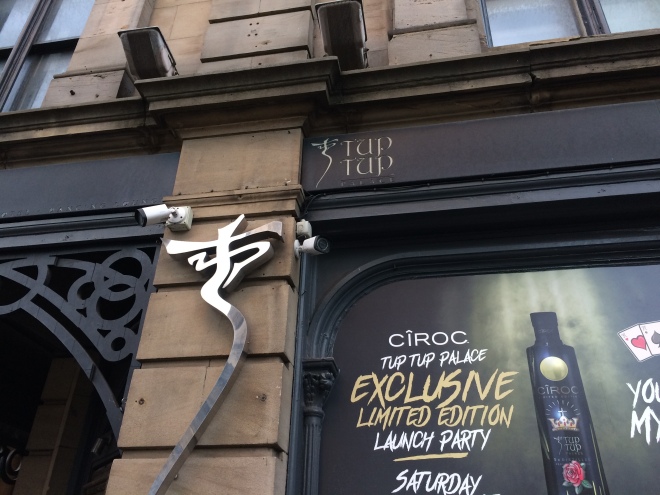 It is also right next to Newcastle Castle. 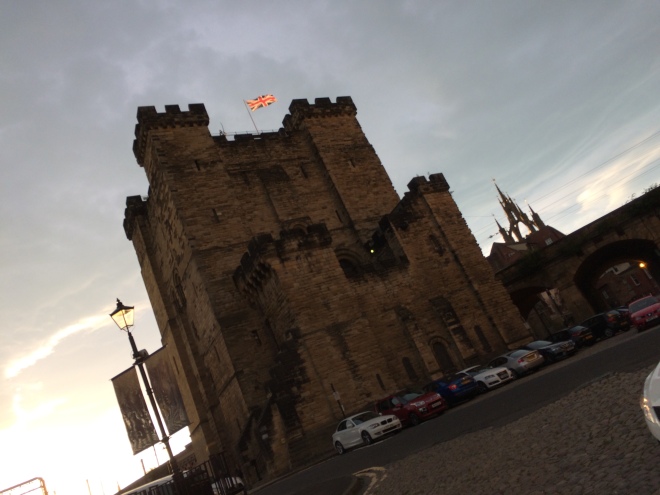 We headed to a bar underneath the Tyne Bridge that wasn’t open when I left for Sydney back in 2017. By The River Brew Co. reminded me of Eat Street in Brisbane. Eat Street was a street-food festival using shipping containers as a venue. By The River Brew Co. does the same thing, with a micro brewery and a street food market next to it. We watched the sun set and I had a taste of what was on offer. 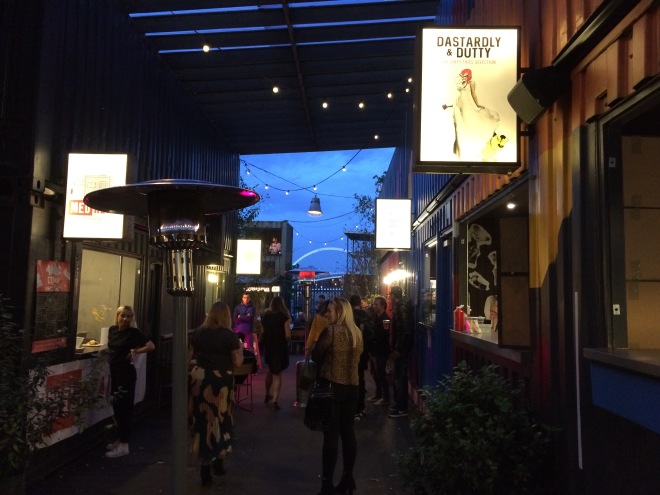 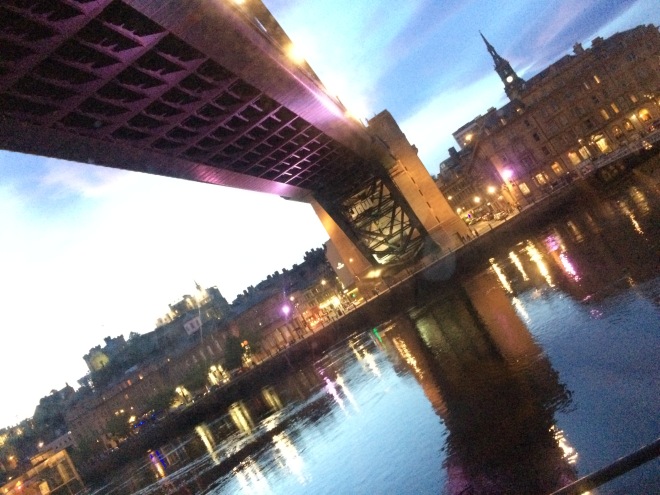 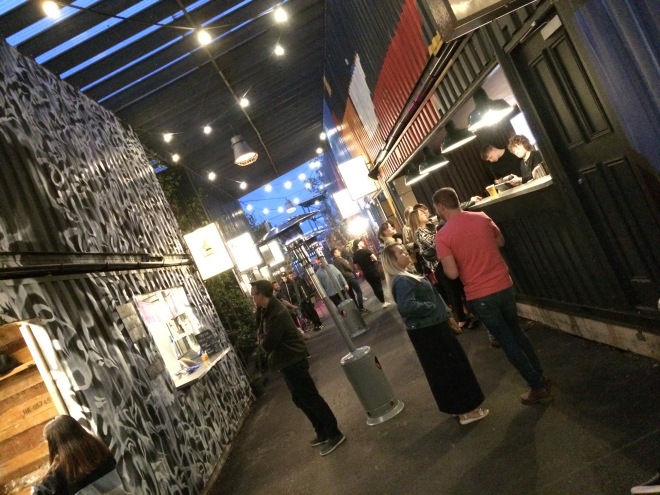 I would recommend it if in Newcastle, and I will visit again on another trip to the city.

But it was time for me to get the train to London, I don’t know if I have told you this, but I had a Skype interview for a hotel in Central London whilst I was in Melbourne, and as soon as I landed in London I was offered the job. I said my goodbyes and prepared for the three hour journey to the capital.

It wasn’t as emotional as it was moving to Sydney, as I am only three hours south. Trains can be expensive (as is London!) but I hope to make regular journeys back up north.

‘Mind’. This segue’s into my next shot from Durham, as I was walking up the steps to Durham Station I noticed these were placed on the railings. 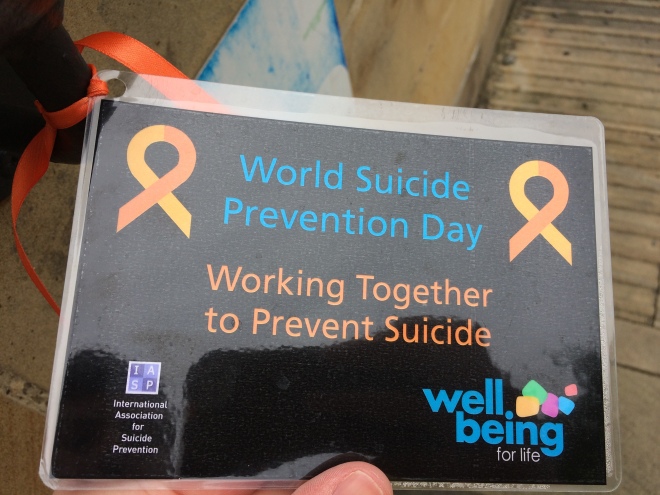 It is a sad reminder that many lives are lost on railways, often suicide. Traumatic for those that witness it but even more tragic for those that feel they need to end their lives. Similar to cards placed on bridges, I feel these messages are important not just for those considering doing this, but for the rest of us that need reminding that it is a real issue that we need to address.

I waited for my train, I made the journey from Bishop Auckland to Darlington, Darlington to Kings Cross. 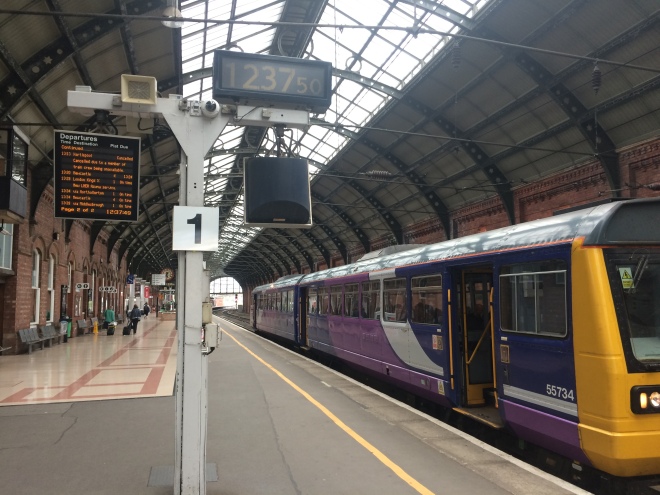 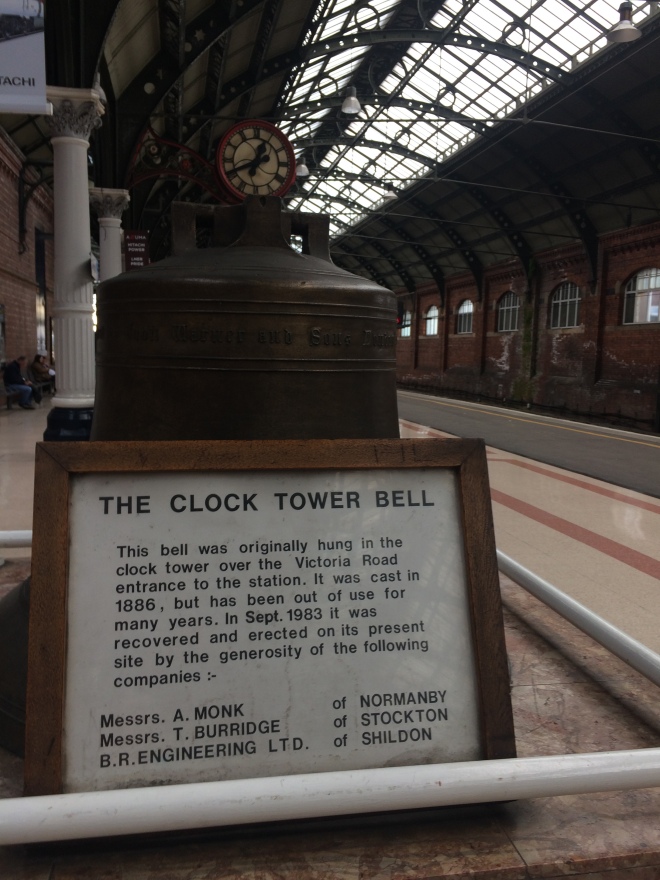 My next post will be from London. And I already have lots of shots to share with you and so many places to see. I have a few ideas as to how I want to involve you in my travels and I am excited for this chapter.

Thank you for reading, I will see you soon from London!

Firth of Fourth Bridge Photo by Zhanhui Li on Unsplash 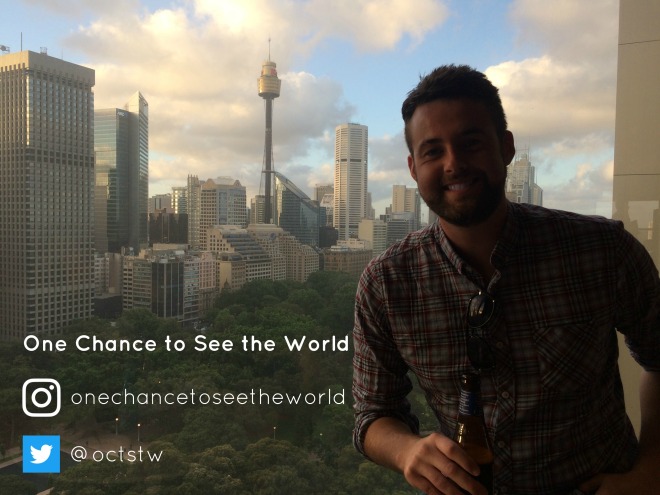