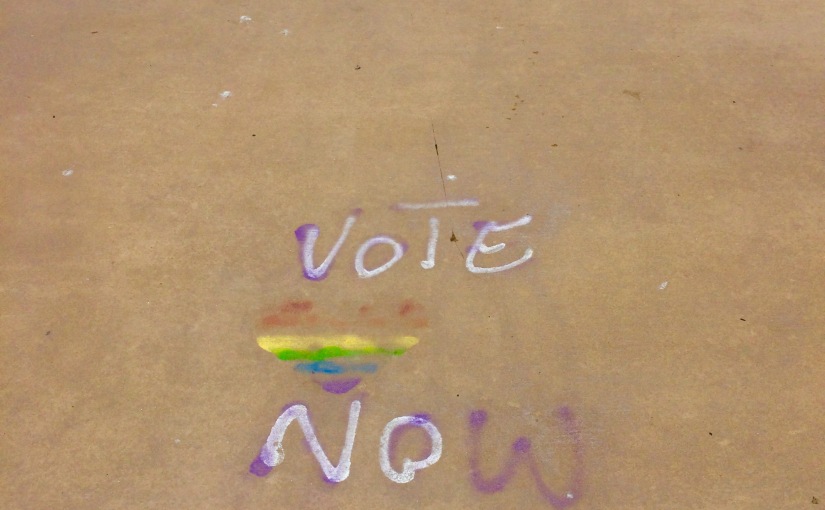 I posted an image yesterday with street art from (seemingly) two different artists. Since then I have discovered another example of this from Newcastle, NSW. Basically, it is a spray painted message that was edited by someone else to say something else.

Now, this one needs very little explanation compared to yesterday’s. The first spray painted message read ‘VOTE NO’, inspired by the recent vote for same sex marriage here in Australia. Many of you will already know that the yes vote won, although it is clear there was a campaign to prevent it from doing so. I even found protests looking up into the Sydney skies, I posted about it in The sky told me how to vote today.

I feel sorry for these people. I have been watching debates from those opposing same sex marriage such as Ben Shapiro, and although he can give a coherent, educated rebuttal from faith, I just cannot find sympathy. One of the reasons is that it is heavily inspired by faith and religion, a reason why I left it behind. I cannot think of another reason why anyone would be opposed to same sex relations, other than the reason I provided in this post.

Being religious just isn’t a good enough excuse for me. I found that leaving it behind meant I had less reason for telling people how to live, or be offended by how they choose to live. Plus, the rainbow flag looks great painted onto a concrete floor. If I am not being harmed by a same sex partnership and guys are free to date guys instead of the girl I could be talking to, I am happy. What could be worse for traditional marriage than two people of the opposite sex not wanting to be with each other anyway?!