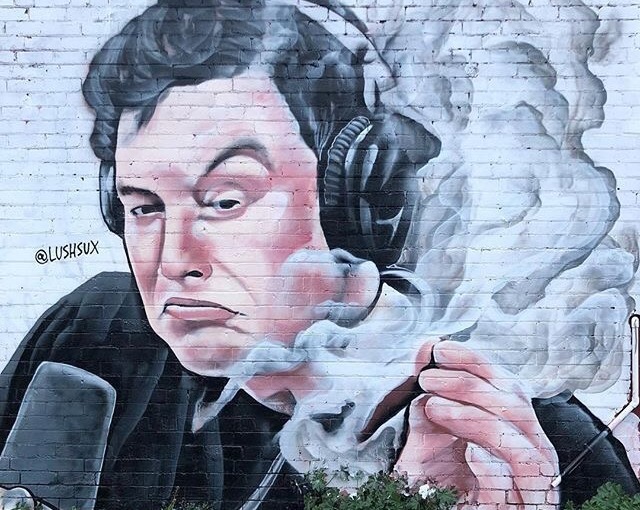 This great piece of street art is the work of @lushsux. It was created in the aftermath of what became for me a very sad controversy on the Joe Rogan Experience in the past few days, during a conversation between Joe Rogan and Elon Musk. 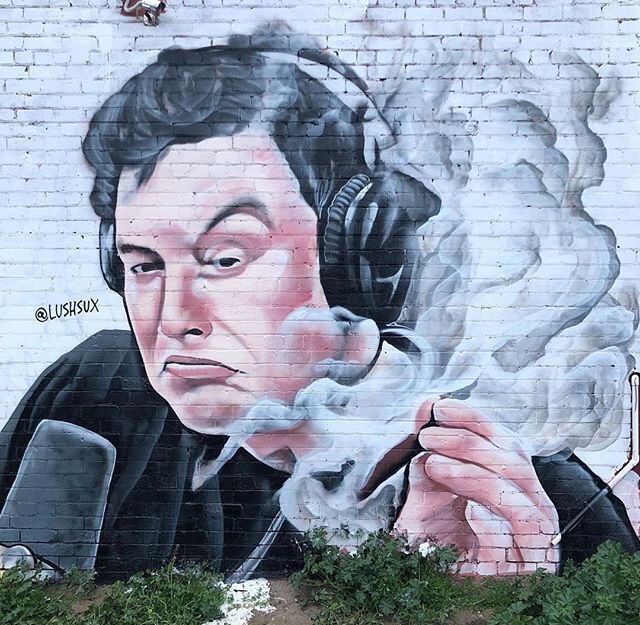 If you haven’t seen it, Joe asked if Elon wanted to try some weed during the lengthy conversation and Elon took up the offer. This can be seen below. For your convenience, the weed ‘incident’ occurs at 2:10:00 (that’s two hours, ten minutes). The above artwork is taken from the exact reaction he had after inhaling.

This is such a shame because this podcast was such a great and insightful look into Elon Musk’s mind, and Joe Rogan as ever provided a great conversation. Looking at the likes, this was in fact one of the highest rated podcasts that he has uploaded from the ones I have watched.

As this happened live, Musk even started receiving texts from presumably either family, friends or colleagues asking why he was smoking weed on a live podcast to millions of people. But this is what I like about Elon. He is so laid back and doesn’t seem to care too much about what people think of him. If this was heroin, it would be a different story in my eyes. The shock would be justified. But this was a substance that is legal in LA, where the podcast takes place.

They also drank whiskey during the podcast. You know, alcohol, that thing that causes so much trouble in the world. It is funny how we pick and choose what we are offended by, and how much of this is determined without much logic or reasoning. People don’t really seem to care about the drinking, but the smoking seems to still be fairly taboo. I find this fascinating.

It is as if we have been programmed to be offended by certain things. If only we were able to talk about the things that offend us and question why they do, instead of just simply being offended and sticking to this simple and not very productive plan. Why is weed more shocking than alcohol? Why should this level of hysteria create headlines such as ‘Tesla in Turmoil’ as seen here The Telegraph, resulting in an executive feeling the need to resign (if this was indeed the reason)? Okay, the CEO of any company smoking weed is in fact something you do not see everyday. But again, this is why Musk is such a refreshing change for me and so many others. He isn’t robotic. Well, some would say he must be a robot to maintain such high work ethic and creativity, but what I mean is he doesn’t feel the need to stick to a script and tick all the traditional boring boxes. This is why he stands out for me so much more than anyone else right now.

-He wants to colonise Mars and take humanity beyond a single planet species.

-He doesn’t like how busy cities are with traffic so is creating underground tunnels to relieve congestion.

-He wants to increase the amount of electric cars so founded Tesla.

-He isn’t happy with the speeds of transportation and his proposed Hyperloop would reduce commute times from hours to minutes.

He literally wants to take humanity to a higher level, and people are offended by weed for a second? The funny thing is, he didn’t even inhale. He admitted that he doesn’t ever do it, this was a one off.

And for me personally, this kind of mentality- to ignore the positives and obsess over the negatives- is why we aren’t progressing at the rate we could be on this planet. We love to hate and conflict much more than we are willing to evolve and improve the species. The people that see a man that is revolutionising the way we live and raising the bar for our species and say ‘hey, he just smoked weed, I don’t like him’, are people that really lack the inspiration that I try to feed off. Would I choose a person that dares to be different over a person that doesn’t, especially when the offended person provides only a fraction of the ambition, intellect and execution? 100%.

Being offended is easy, and easy doesn’t get anyone anywhere.