I really like this about Sydney. Due to the huge expanse of water that the city is built around, many people take these Yellow Water Taxis to and from various points around the Harbour. These are yellow cabs that resemble those in New York City, except they float. I like the yellow cabs, we don’t get them in the UK and when I see one I know I’m on holiday. It also reminds me of my times in NYC. I remember the first time I jumped in a Yellow Cab over there, the driver claimed he didn’t know where Times Square was. It was either our accent or he was taking us for a ride- literally- for a higher fare. I prefer to believe it was the accent, despite his obvious experience with passengers from all over the world. 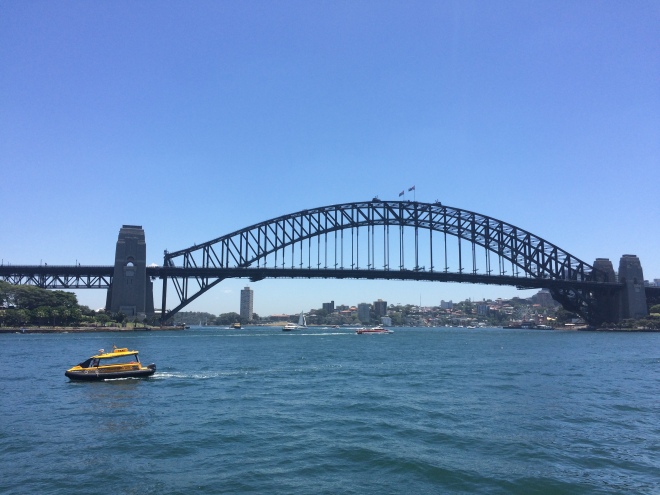 Funnily enough, back on dry land in Sydney there is one taxi company that uses cars that resemble London black cabs. I haven’t seen too many of these here, the main taxis you will find are white and don’t really stand out in any unique fashion. I don’t know if these London cabs cost more or have a back story, or if they are simply trying to be different.

Update: I found some nice info on the front page of their website, https://www.londontaxis.com.au.

They are made back in England! Who knew.

Many cities have help creating a unique identity with the style of cabs they use. It would make sense to have them stand out in some way considering they are one of the most popular methods for people to get around. Yellow Cabs often appear on postcards and souvenirs from the Big Apple, and Black Cabs the same with London. How many other cities have cabs that are as recognisable? Did somewhere else start the yellow taxi trend first? There aren’t too many cities that I have traveled to that have taxis truly stand out as much, but I’m sure there are more.

I can’t believe I’ve typed a blog post about taxis.

18 thoughts on “Does your city have Yellow Cabs?”